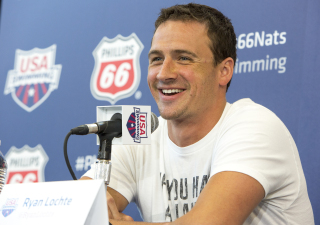 IRVINE, Calif. – Ryan Lochte makes statements with his swimming and his fashion. When the 11-time Olympic medalist showed up at the U.S. Swimming Championships pool on Tuesday, his white T-shirt did a lot of talking.

“If you have a lane,” it read across his chest.

“You have a shot,” across the back.

That’s been an issue for Lochte since he won four medals, three golds, at the season-climaxing World Championships in Barcelona last summer. Three months later, he tore his left MCL and sprained his ACL after a teenage girl ran to him, he caught her and they both fell on Nov. 2.

Lochte, who switched training bases from Gainesville, Fla., to Charlotte one month before the mishap, has raced sparingly since. He returned too quickly for a meet in February and then found out he retore the knee in April.

“My knee has been hurting a lot lately, and I think I’m going to pull out of Nationals and just call it an end of the year,” he said, pausing only slightly for effect. “No, just joking.”

Lochte has his usual full slate of events lined up for the U.S. Championships beginning Wednesday, a qualifying meet for the the two biggest international meets between now and the Rio 2016 Olympics. Those are the Pan Pacific Championships, Aug. 21-24 in Gold Coast, Australia, and the 2015 World Championships in Kazan, Russia.

He’s entered in six events, including all four that Michael Phelps plans to swim.

Truthfully, Lochte said his knee is 100 percent. He raced at a meet in July for the first time in three months, swimming against Phelps in three finals and getting beaten by Phelps in all three.

That return came as a shock to doctors. Lochte wasn’t expected to get back into the pool until a couple weeks ago, but he’s been swimming for two months.

“They said I should be in like a science book because of the way I recovered so quickly,” Lochte said.

Lochte said in April that he considered retiring during grueling injury rehab and the toughest several-month stretch of his career, which spans three Olympics. It was Phelps’ return from a 20-month break that helped motivate him to come back.

“My body is not getting any younger, I’m falling apart,” said Lochte, the sixth-oldest swimmer out of nearly 1,000 at this week’s meet. “So there was a lot of doubt of ever being the same swimmer, but you know, everything happens for a reason, and maybe this is a blessing in disguise. Maybe this is what I needed. Maybe this is the rest I needed going into 2016.”