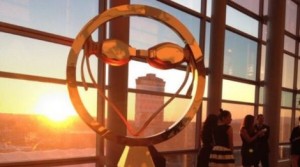 LOS ANGELES — Ryan Lochte and Olympic and world champion Katie Ledecky won male and female athlete of the year at the Golden Goggles as USA Swimming honored its top performers.

Lochte beat out backstroker Matt Grevers for male athlete Sunday night at the 10th annual awards hosted by comedian Kevin Nealon. Lochte also earned the honor in 2009 and 2011. He didn’t attend, having injured his left knee when a fan ran at him and they fell in October.

“Ryan is fine, he just got tackled a little bit,” Urbanchek said, then dropped the swimmer’s signature word to audience laughter. “Ryan would say, ‘Yeah’ and ‘Jeah!’ ”

Ledecky, a 16-year-old from Bethesda, Md., defeated Missy Franklin and Haley Anderson to win female athlete honors. She also won female race of the year for her victory in the 1,500 freestyle at worlds.

“This was a big year for me,” Ledecky said. “This award represents a process. It’s been a fun one. I owe that a lot to my family, my teammates, my classmates, my teachers, everyone I’ve been surrounded with.”

Lochte also won male race of the year for his performance in the 200-meter individual medley at last summer’s world championships in Spain. He rallied to win the event by 1.3 seconds and became the fifth man ever to win capture three consecutive world titles in an event.

Ledecky burst onto the international scene at last year’s London Olympics. She followed that up with four gold medals and world-record times in the 800 and 1,500 freestyles at worlds. The teenager became the first American woman to win the 400, 800 and 1,500 free at the same world meet.

“The real award is being on this team and with these people,” Ledecky said.

Franklin didn’t go back to college empty-handed. The freshman at California shared the trophy for relay performance of the year with Natalie Coughlin, Shannon Vreeland and Megan Romano for their win in the 400 free relay at worlds.

Franklin flew in from Las Vegas, where she helped the Cal swim team win a weekend meet. She continues to press on toward the 2016 Rio Games.

“You have to look at the big picture,” she said. “We’re all trying really hard to train.”

Romano was the night’s other two-time winner. She received the perseverance award.

She failed in her bid to make the 2012 U.S. Olympic team, and came up short in qualifying for an individual event at worlds. But she won six medals at the World University Games in Russia last summer, and earned gold medals in two relays at the world championships in Spain.

“It was difficult in 2012,” Romano told the crowd, “but I’m a firm believer in everything happens for a reason and this past summer proved that.”

Bruce Gemmell, who oversees Ledecky’s career, won coach of the year honors. He expanded her strategy by teaching her to swim from off-the-pace instead of only racing from out in front.

He won a silver medal in the 400 IM at the world championships, his first major international meet.

The winners were selected by a nine-member panel in combination with online fan voting.

Copyright 2013 by The Associated Press