Much has been written about how Olympic gold-medalist swimmer Ryan Lochte is an intellectual vacuum.

His E! reality show, “What Would Ryan Lochte Do?” chronicles every cognitive misstep and every abdominal contraction Lochte experiences.

Yet consider the subtle genius that is Ryan Lochte.

Look beyond his comical, blank-stare-filled interviews with the press.

Try to see past the countless shots of him without a shirt on.

Halfway through its eight-episode season, the philosophical question posed by the title of this show has been answered: 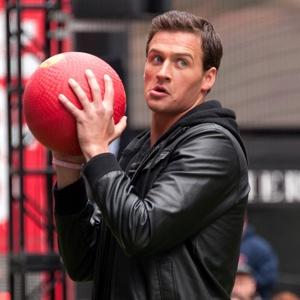 Ryan Lochte would, in any given situation, shout “Jeah!” and smile and dance it out with his buds, with some swim training for good measure.

Lochte appears on first glance to be a beautiful catastrophe, the likes of which has not seen since Jessica Simpson made befuddled musings over chicken and tuna on MTV’s “Newlyweds.”

Lochte is mesmerizing, and not just because he’s got a way with pickup lines and tightly fitting T-shirts and says his life “is like a Seinfeld.”

He makes up words like “enfidence” — which is similar to “emphasis” but with added moxy — and “recipitate,” which is indescribable.

He’s managed to take a career in swimming — a sport people generally care about for about eight days in a four year period — and make himself a brand. A whole brand built around the perception that he has nary a brain cell to spare.

As it turns out, he’s a charming fellow with an especially good relationship with his mom, and a desire to help out charitable causes.

Once rumored to be the next “Bachelor,” Lochte is clearly far more comfortable clubbing it up in Gainesville, Fla. and taking his many dates out to eat at the same familiar sushi restaurant. He works out in a garage. This is all by design.

The editing of the show would lead you to believe that Lochte is incapable of any kind of rational thought, but a closer look at the evidence suggests otherwise.

Consider the ways in which Lochte gets it:

* He’s aware: In describing how he was tapped to play the “sex idiot” on the final season of “30 Rock,” Lochte said in an interview, “I get to play myself. I get to play just Ryan Lochte, so it’s not too much acting that I have to do — so that’s pretty good.”

* He’s good at self-promotion: His name is on the bottom of his shoes. Assuming it’s not there with a phone number and a note that says, “If lost, please call,” this is a good way to promote your own brand.

* He’s philosophical: “You see this smile? Who has sex that doesn’t smile afterwards?”

* He’s forthright: “I’ve never been asked that question, ‘What is the Lochte edge?’ and . . . I honestly have no idea.” This seems completely fair.

* He’s shrewd: When asked by an interviewer on his show, “Would you describe yourself as a player?” Lochte responded, “Describe player.” Brilliant.

* He’s practical: When Lochte didn’t know how to make a pizza, he didn’t bother asking amateurs for help. He called the local pizza place. “Hey, it’s Ryan. I’m not calling to place an order.”