Ryan Lochte had his hands full this past week at the Olympic trials (mostly thanks to some guy named Michael Phelps), but he still had time to pick out some pretty sweet kicks to show off.

He started the week with this flashy pair (see photo below ). Yes, those are wings. And yes that is a tribute to the flag. Apparently those give him some good luck as he won the 400 meters the night he busted those out. 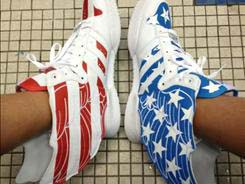 He Tweeted about these special sneakers before the trials, saying: “Got some new kicks for trials. Don’t duplicate!! #swagismine”

But Lochte, who claims to have over 130 piece of footwear, wasn’t done there.

On Saturday night, when he competed in three different events in 60 minutes, he went green. Or make the sparkly green.

Those shoes were made special for him by Speedo. The company recently explained to the New York Times the motivation behind the design, which includes emerald rhinestones.

“He wanted green, he wanted bling,” the director of marketing at Speedo told the Times. “He likes to make a statement when he walks onto that pool deck.”

Speedo is also selling a flip-flop version of the shoe for $24.99.

Lochte’s hoping to add a little more bling in London. Though he’d prefer it to be gold.