Home   »   Press   »   Ryan Lochte: How the Olympian Switched Up His Routine for London Games

When the London 2012 Summer Olympic Games kick off July 27, swimmer Ryan Lochte will be battle ready. 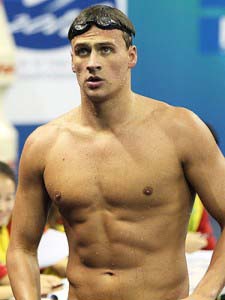 Despite winning two gold medals and another pair of bronzes in the 2008 Beijing Olympic Games, the 27-year-old Florida native reveals in the latest issue of PEOPLE how he overhauled his diet and training regimen to bring his game to the next level.

“I wasn’t really satisfied with my outcome in 2008,” says Lochte, “so I needed to change some things.”

One of those things: his on-land training.
nspired by his weight coach, who participates in strong-man competitions, Lochte incorporated some heavy-duty exercises into his routine – like flipping 850 lb. tires.

He’s also switched up his diet. Though Lochte used to be a junk-food fanatic – “I’d eat a whole bag of chips before practice,” he says of the days when a typical breakfast might’ve been “two or three McDonald’s egg McMuffins, some hashbrowns and maybe a chicken sandwich” – these days he fuels up in the morning on scrambled eggs, fruit and oatmeal, and salads or healthy wraps for lunch and dinner.

It’s made him fitter, says Lochte, and hopefully ready to give Phelps a run for his money.

“He’s one of the top swimmers in the world, and one of the hardest racers,” says Lochte. “I love racing him because it’s always a challenge.”

For more on whom Ryan will root for at the London Games and his post-Olympics Fashion Week plans, pick up the latest issue of PEOPLE, on newsstands Friday