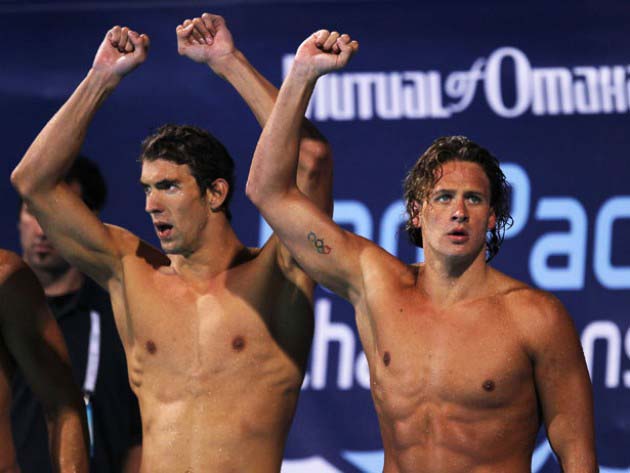 We’re getting really excited for the summer Olympics around here, guys. And today’s number one reason? Ryan Lochte. Today, Lochte qualified fastest in the 200-meter freestyle prelims at 1:48:14. He’s the world champion in the event, FYI, after beating Michael Phelps for the title last year in Shanghai. Lochte also beat Phelps in their first final at the Olympic trials on Monday when he won the 400 individual medley on Monday. You know how else the gold-medalist is beating Phelps? In the eye candy department.

Lochte, 27, is from Daytona Beach, Florida and majored in sculpting his abs and perfecting his tan — er, we mean sports management, at the University of Florida. He came home from Beijing in 2008 with three gold medals, two silver and one bronze. And in 2009, he managed to become the first swimmer to set a world record since the ban on performance enhancing suits. So he’s got more than just fantastic bone structure and a perfectly chiseled torso.

Since the championships, he’s been training for the Olympics with Coach DeLancey who praised Lochte in Men’s Health in its July/August issue: ”I’ve worked with some tough athletes. There’s none tougher than Ryan. He’s not afraid to throw up.” Ew. But we totally admire his need to achieve!

“Pain, tolerance, endurance — when it comes down to that point, there’s always something left,” Lochte says. “You just have to find it.”

We’ll leave the pain and vomiting to Ryan. We’re all about pleasure here, which you will find as you check out these 20 drool-worthy photos: