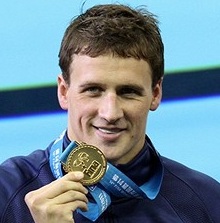 Ryan Lochte is one of the top swimmers in the world, but his ability and accomplishments were overshadowed by Michael Phelps’ historic performance at the 2008 Summer Games in Beijing. Motivated by a desire to achieve more at the London Olympics, Lochte says he made some changes to his diet and training.

“I wasn’t really happy with the way 2008 turned out for me,” Lochte told The Associate Press. “I wanted to change some things. I started eating healthier. I actually gave up fast food. I gave up candy and potato chips and everything else. I started watching what I ate.”

His diet isn’t the only thing he changed.

“I took my weight training to a new level,” he said. “I got a lot stronger, a lot bigger. I think it showed in the past three years how I progressed. So, hopefully, this summer, I’ll keep it going.”

Perhaps it’s the focused attitude and determination that leaves Lochte constantly believing that he will be the star of these Olympics.

“This is my time,” he keeps saying.

“I feel like that,” Lochte said. “I don’t know if it’s going to happen, but I definitely feel like that. Just all that hard work, all those hours in the pool, I feel like it’s about to pay off. I guess we’ll just have to wait and see this summer.”

I would contrast Lochte’s changes with Phelps’ purported diet, but the six-time gold medalist recently said his 12,000 calorie-a-day diet is just a myth. We’re expecting big things from Lochte at this summer’s games.