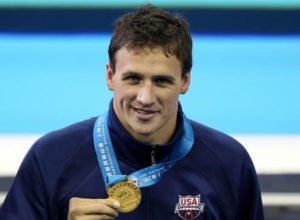 SHANGHAI — Ryan Lochte continued to be the dominant swimmer of this year’s world championships, winning his third individual gold in the 200-meter backstroke and anchoring the U.S. men to their fourth consecutive world title in the 4×200-meter freestyle relay Friday.

After winning the 200 back in a personal-best one minute, 52.96 seconds, Lochte swam the fastest relay leg of the night (1:44.56) to pull ahead of France and give the U.S. men a winning margin of more than two seconds.

“There’s nobody better to have at the end of a relay than him,” said Michael Phelps, who led off the relay but once again was outshined by Lochte.

Phelps’ split of 1:45.53 was only the third-fastest leadoff leg of the night. Ricky Berens and Peter Vanderkaay swam the other legs.

“I’ve said this every night so far — hopefully with more training, I can swim faster,” said Phelps, who finished second to Lochte in two races earlier this week.

In claiming her first 200-meter breaststroke world title Friday, the USA’s Rebecca Soni finished faster than she did at the 2009 worlds, where she faded to fourth.

“I don’t need to worry about that any more,” Soni said. “I proved I can win the gold medal.”

The reigning 200 breaststroke Olympic champion won Friday in 2:21.47 to complete a sweep of the breaststroke events in Shanghai.

Soni and 16-year-old Missy Franklin have been the brightest stars for the U.S. women here. Franklin set an American record (2:05.90) for the fastest qualifying time in the 200-meter backstroke semifinals Friday. The final is Saturday.

“I’m just going to go out and represent the U.S. and have a blast and do the best I can,” said Franklin, who already has won bronze in the 50-meter backstroke and two relay medals (gold and silver).

“I still have one more race left to finish off this meet,” Lochte said. “Then after that I guess I’m just going to get ready for 2012.”

“It’s a definite changing of the guard,” said U.S. swimmer Tyler Clary, who won bronze in Friday’s 200 back. “Some people might say, you know, Michael’s not exactly on his game. But all that matters at a race is who came most prepared on that day and lately it’s looking like Ryan.”

Lochte is the reigning Olympic champion in the 200 back but won bronze in the event at the 2009 world championships, with the USA’s Aaron Peirsol winning gold. Peirsol, the world’s best backstroker for nearly a decade, has since retired.

The 200 back is the only event in which Lochte has won an individual Olympic gold. He also won the 200 back title at the 2007 worlds.

Peirsol’s absence opens the door for Lochte to fully take ownership of the event, especially since it’s not one of Phelps’ specialties.

Although, given the way Lochte is swimming right now, that might not matter.