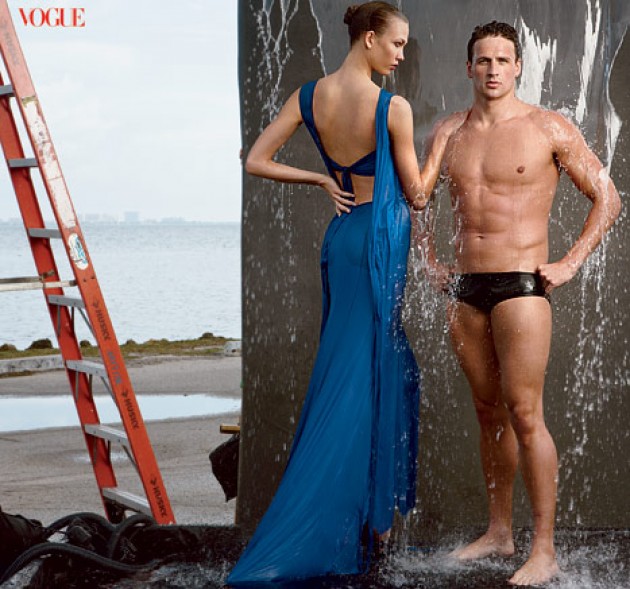 Ryan Lochte is only the fourth man to appear on the cover of Vogue, but he’s the first to do so shirtless! (Previous cover boys include George Clooney, Richard Gere and LeBron James.)

The 27-year-old Olympic swimmer shows off his impressive physique for the magazine’s June issue, appearing alongside soccer player Hope Solo, 30, and tennis pro Serena Williams, 30. Inside the magazine, Lochte wears a tiny black speedo while posting next to supermodel Karlie Kloss, 19 (in a Haider Ackermann gown).

Three-time Gold medalist Lochte is always striving to perfect his form — and his body. “If you take two or three days off, you are not going to feel right for a week or two,” says the University of Florida alum, who admits to “bruising and scraping things playing basketball and skateboarding” during

Lochte, whose father, Steven, was a swim coach, first dreamed of competing in the Olympics while growing up in Bloomfield, New York. When Chicago-born swimmer Pablo Morales touched the wall to win a gold in 1992, “I said, ‘You know what? Someday I’m going to get a gold medal just like him.'”

His dream came true. Lochte won a gold and silver medal in Athens in 2004, and in Beijing in 2008, he won two gold and two bronze medals. Since then, he’s racked up a number of sponsors, including Gillette, Gatorade, Speedo and Ralph Lauren, and beat fellow Olympian Michael Phelps at the world championships.

Lochte is predicted to win as many as five gold medals in London this summer.