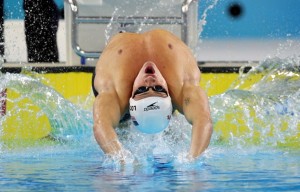 Ryan Lochte (USA) and Mireia Belmonte Garcia (ESP) were the best swimmers at the 10th FINA World Swimming Championships (25m) in Dubai (UAE), after getting respectively seven and four medals at the Hamdan bin Mohammed bin Rashid Sports Complex. This consecration is not new to Lochte, already the “most valuable” athlete of the competition in 2006 (Shanghai) and in 2008 (Manchester). For the Spaniard, on the contrary, this is a completely new situation, after reaching the podium in the most demanding events of the programme – gold in the 200m butterfly, 200m and 40m individual medley, and silver in the 800m free. At 20, she obtained a significant breakthrough in Dubai, and will surely be one of the swimmers in evidence in the years to come. Lochte, 26, is already a confirmed star and made history in Dubai, by being the first swimmer in the history of the championships to win seven medals in the same edition of the competition.

At 23, and training in Auburn (USA), Cielo is already the best swimmer in Brazil’s history and will certainly be the sprinter to beat at the next major rendezvous, including the 2011 FINA World Championships in Shanghai (CHN), and naturally at the 2012 Olympic Games in London (GBR).

In his successful trajectory, Cielo has been the “obstacle” of French sprinters, namely Fred Bousquet, Alain Bernard, Amaury Leveaux or Fabien Gilot. This time, the latest “victim” was Fabien Gilot, who finished second in a time 45.97 – it was his first individual medal at world level, after being first in the 4x100m free relay and third in the 4x200m free relay. The bronze went to Russia’s Nikita Lobintsev (46.35), who got his fourth medal of the championships, after winning the 4x200m free relay, and finishing second in the 400m free and 4x100m free relay.

Lochte makes history
The other highlight of the day was naturally the fifth medal of the competition for Ryan Lochte (USA), in the 200m backstroke. Comfortably controlling the entire race, the 26-year-old champion got the gold in 1:46.68, a new championships record, and earned his 20th medal in this competition, after his first participation in 2004. In Dubai, Lochte had also won the 200m free, the 200m IM, the 400m IM (in both IM events, with new World Records), and had been second in the 4x200m free relay. Clearly behind, the two remaining spots of the podium went to Tyler Clary (USA, silver in 1:49.09) and Markus Rogan (AUT, bronze in 1:49.36 – the Austrian champion had been the winner of this event in 2008). The best performer of the season before Dubai, Russia’s Arkady Vyatchanin did not qualify for the final, being only 10th of the heats.

Less than half an hour later, Lochte comes back to the pool for one more victory, this time in the 100m IM, in a time of 50.86, slightly slower than his championships record (50.81) established in the semis. The recent 2010 European champion, Markus Deibler (GER) was second in 51.69, while the bronze went to Sergey Fesikov (RUS), in 51.81. George Bovell III, from Trinidad and Tobago missed what could be the first podium ever for his country in the history of these championships by a mere 0.16 seconds – he was fourth in 51.97.

Finally, Lochte’s great finale came in the 4x100m medley relay, when the USA got the gold in a new championships record of 3:20.99. It was Lochte’s seventh medal in Dubai and the entry in the history books of this competition. Just for the record, Russia finished second in 3:23.12, while Brazil got the bronze in 3:23.12.

“I knew before the meet that my last day would be one of the toughest, but I am always up for the challenge. This is probably one of the worst shapes I have been in for a World Championships, I’m not really 100%, I’ve done a lot of training, I haven’t really rest for this meet and it’s actually very good for me because it makes me want to race harder and it’s a stepping stone for the Shanghai Worlds,” said Lochte after his five-day achievement. From his words, one can wonder what would his performances be if he had been in good shape…

Silva: a touching moment
Certainly inspired by Cielo’s performances, his teammate Felipe Silva (BRA) got he first gold ever for Brazil in the 50m breaststroke, touching first in a new championships record of 25.95. Silver medallist in this distance at the 2009 Worlds in Rome (ITA), Silva obtained in Dubai his first world title and gave Brazil its third gold in the 10th FINA World Swimming Championships. At the award ceremony, Silva was the protagonist of the most touching moment of this competition, when he kneeled down while listening to his anthem in tears (in what was most probably “the” picture of the championships). The current World Record (25.25) holder and gold medallist in the 100m breaststroke, South African Cameron van der Burgh was second in 26.03, and the bronze went to Aleksander Hetland (NOR), in 26.29.

Dutch festival…
For the second time in these championships, the Netherlands got a one-two finish in the women’s 50m free thanks to the gold of Ranomi Kromowidjojo (23.37) and the silver of Hinkelien Schreuder in 23.81 – in the 100m free, Kromowidjojo (also 2010 European champion a couple of weeks ago, at home, in Eindhoven) had already won, followed by Femke Heemskerk. The bronze – first medal ever for this country in the history of the championships – went to Arianna Vanderpool-Wallace, from Bahamas, in 24.04. It’s the first international success at this level for Vanderpool-Wallace, a 20-year-old swimmer living and training in Florida.

…and Pellegrini’s nightmare
In the women’s 200m free, Camille Muffat (FRA) won a thrilling duel with US Katie Hoff, getting the gold in a new championships record of 1:52.29, against Hoff’s effort in 1:52.91 (silver medal, her third award in Dubai after the gold in the 400m free and the silver in the 4x100m free relay). For Muffat, it was her first individual medal in these championships, after a third place in the 4x200m free relay. The bronze went to Australia’s Kylie Palmer, in 1:52.96. But the race was also marked by the disastrous performance of WR (1:51.17) holder Federica Pellegrini (ITA), only seventh in 1:55.24. The Italian diva, Olympic and world (long course) champion in this event, left Dubai only with one medal, the bronze in the 400m free. In the heats, the European champion in early December, Femke Heemskerk (NED) could not qualify for the decisive race, clocking the ninth time of the morning session.

Africa in evidence
Chad Le Clos (RSA), one of the “most valuable” swimmers at the Youth Olympic Games in Singapore (SIN) won his first senior world gold medal in Dubai, by imposing his excellent strategy in the 200m butterfly, and stopping the clock at 1:51.56. Kaio Almeida (BRA), the WR holder (1:49.11) was the third Brazilian medallist of the day, getting the silver in 1:51.61. The bronze went to the fastest qualifier of the heats, Hungary’s Laszlo Cseh (1:51.67). After an excellent 2010, the Magyars will not keep the best of the memories from Dubai, as they left the Hamdan bin Mohammed bin Rashid Sports Complex without winning a single title.

In a men’s 1500m free in “two parts”, Oussama Mellouli (TUN) won his fourth medal in Dubai, this time the gold in a time of 14:24.16. After one silver (400m IM) and two bronze (200m and 400m free), the Tunisian champion had to swim his pet event (he won the Olympic and long course world title in this distance) in the morning slower heats, due to an administrative problem with his entry time for the championships. He then raced alone against the clock, and had to wait for the fastest heat in the afternoon: in the finals’ session, Mads Glaesner (DEN) touched first in 14:29.52, getting the silver, while Hungary’s Gergely Gyurta got the bronze in 14:31.47.

Actively supported by a couple of hundreds of Tunisians living in Dubai, Mellouli praised this help: “It makes it (the victory) all the more special; in all the meets I’ve been to, I’ve never seen that much support, so it’s just unbelievable. I’ve never seen a swimming pool with that much crowd. It just acted like it was a soccer game. These were great championships, I have been fortunate enough to come here in top shape, I got a medal in every single event I tried to race.”

Alshammar medals once more
A special mention is due to Therese Alshammar (SWE), who obtained in this last day, her 17th medal in these championships, since her first participation in 1997 – she now has the same number of podium presences than the best female swimmer of this competition, retired US champion Jenny Thompson. Alshammar has, however, a slight advantage in terms of gold medals (10 for the Swede against Thompson’s nine). This new consecration for Alshammar (33) came in the 100m butterfly, where she was second (55.73) behind Australia’s Felicity Galvez, winner in a new championships record of 55.43. This victory had a special taste for Galvez, who was able to give her country the first gold in Dubai. Already winner in 2008, the Australian has now seven medals in this competition.

“It’s the first time I didn’t have to swim in the morning for the whole meet so I had some time to think and I thought ‘we haven’t won a gold medal for Australia which is a bit odd’, normally we would be breaking in so I thought it would be good to be the person that brings home the gold medal. I feel honoured I have done that for my country,” confessed Galvez after the race.

Always on a high note concerning performances, the 12-final session of Day 5 in Dubai, included the expected victory of Jing Zhao (CHN) in the women’s 50m backstroke, in a new championships record of 26.27. The race was also marked by the bronze of Spain’s Mercedes Peris, in what was the eighth medal for her country at these championships. Peris’ past major achievement had been a bronze medal in the same event at the 2010 Europeans (long course). In the women’s 200m breaststroke, the current world record holder, US Rebecca Soni dominated the operations, in a championships record of 2:16.39 – it was her fourth medal in these championships, after the gold in the 50m and 100m breaststroke, and the silver in the 4x100m medley relay.