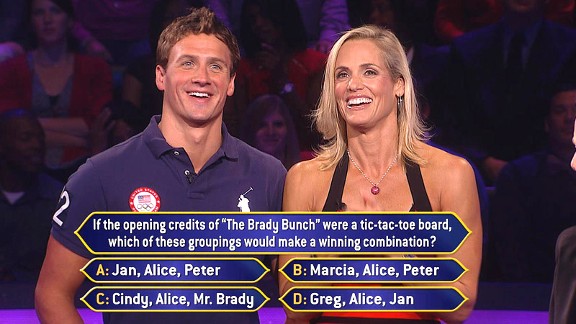 On Monday’s heroes episode of “Who Wants to Be a Millionaire”, Olympic swimmers Dara Torres and Ryan Lochte made it up to the fifth question of the trivia game show and used their “Ask The Audience” lifeline. They went with the advice of the studio audience, which unfortunately was wrong.

Torres and Lochte were able to take home $10,000 to benefit the U.S.O.C, whose mission involves training and assistance for U.S. athletes preparing for the Olympics. On Friday’s show, Olympic gymnasts Dominique Dawes and Jonathan Horton won $25,000.

Here’s the question that tripped up Torres and Lochte:

If the opening credits of “The Brady Bunch” were a tic-tac-toe board, which of these groupings would make a winning combination?

Torres and Lochte asked the audience,who came up with “C”. The correct answer was “A.”