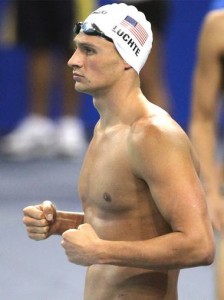 Michael Phelps is currently sleeping in a special pod that simulates an altitude of 8,000ft. That either means his grasp of geography matches the national stereotype or the most successful athlete in Olympic history is targeting another multi-garlanded Games come London and all its 49ft of altitude.

Phelps is the most successful athlete in Olympic history with 14 gold medals. He has 16 of all colours and needs three more in London – which will be his third and last Games – to become the most decorated in history. The Soviet gymnast Larisa Latynina won 18 medals in total and it is reasonable to suggest her record is on borrowed time.

Phelps won eight golds from eight attempts in Beijing four years ago. The number he will attempt to win in London will not become clear until after the US trials next month but whatever he and his long-time coach, Bob Bowman, settle on, he might yet find himself in the unaccustomed position of being usurped as the stellar name in the American swimming team.

At 27, Ryan Lochte is a year older than Phelps and has spent most of his career in his team-mate’s wake. Last year that changed. At the World Championships in Shanghai it was Lochte who finished with five golds to Phelps’ four. The challenge was laid.

Tomorrow evening Phelps and Lochte will step on to adjacent starting blocks – barring some improbable turn of events in qualifying – for the Charlotte UltraSwim at the Mecklenburg County Aquatic Center in North Carolina. It will signal the beginning of the end of the Olympic phoney war.

For athletes in all individual sports, and particularly in swimming, the build-up to a Games is in part a game in itself, one of bluff and counter-bluff. Rivals keep wary eyes on times recorded around the globe.

At Britain’s Olympic trials in March, home swimmers set a series of the world’s fastest times this year. They looked good, but at a time when most of their overseas opponents are still in heavy training they have to be in shape to swim fast at the trials or they will not be at the Olympics; bluff and counter-bluff. In Phelps and Lochte’s case the focus is rather closer to home. They rarely have to bother with the rest of the world.

The US trials begin in late June in Omaha, Nebraska, less than a month before the opening ceremony. The Americans like to call it “the fastest meet in the world” and they have cause to do so. The US are the dominant force in the pool, particularly so in the men’s events and even more so when it comes to those Phelps and Lochte will swim.

Omaha will provide a better indication of how many golds the two giants of the pool will go for in London. There has been grandiose talk of Lochte going for nine – one more than Phelps took in Beijing. Lochte is the man who seeks to be king. “I want it really bad,” he said earlier this year. Phelps, who sits on the throne, is thought to be looking at just – that’s a relative “just” – the six swims. According to Bowman, Phelps will compete only in events which he believes he has a chance of winning; this is not about silver or bronze. What is certain is that both cannot rule the pool.

Phelps was untouchable in Beijing but, in the wake of his extraordinary achievements, the young man from Baltimore hit a wall. The life of a swimmer at the level Phelps has reached carries a workload and gruelling intensity few sports demand. Add the pressures of being Michael Phelps – TV ratings in the States went up markedly every time he dipped a toe in the Beijing waters – and it is little wonder he opted out for a while. Back home, he moved to Las Vegas and enjoyed life for a time.

Mark Hunter, the British rower, tells a story of his own post-Beijing down time. He and some friends headed to Vegas, where one night in a casino one of his companions laid Hunter’s Olympic gold medal on the table in an attempt to secure some free drinks. To Hunter’s embarrassment, it worked, but they were soon upstaged by their neighbours as gold after gold clattered on to the table. A friend of Phelps, who was there with his own group of close friends, had seen one and raised it.

For a while the pool was not ignored but it was not indulged. Phelps wanted to come back in time, but even he was not absolutely sure that he would, and if he did whether it would work.

“I didn’t know if the passion or fire was still inside me,” he said in a recent interview.

Bowman, the man behind the Phelps phenomenon, put it at “50-50” whether his charge would return. But return he did and Lochte’s description of his friend and rival as “the hardest, toughest competitor known to man” is no glib assessment. Phelps now says he feels “like his old self again”. But can he be as good as his old self again?

Last year at the World Championships in Shanghai it was Lochte who emerged as the No 1 with those five golds. They went head-to-head in two events, the 200m freestyle and the 200m medley, a quarter of Phelps’ golden eight in Beijing. And Lochte won them both. The freestyle win was his first over Phelps at a major meet but it is the medley victory that looked especially significant: Lochte set a new world record to inflict Phelps’ first defeat in the event at a major championship for nine years.

Lochte is no overnight sensation. Phelps has been aware of his threat since 2004 when Lochte finished runner-up in the 200m medley at the US trials in Long Beach, California. That earned the New Yorker a shot at the Games and he came home from Athens with relay gold, part of a quartet that inflicted a first defeat in six years on Australia – he knows how to interrupt winning streaks.

Lochte’s record is impressive in its own right. He won two golds in Beijing and has 12 world titles to his name. What is different about Lochte is that he appears to be peaking relatively late for a swimmer. He turns 28 on the penultimate day of competition in London and is a little more than a year younger than Ian Thorpe, who first retired six years ago.

Since Beijing, Lochte has embarked on a training regime that is exacting even by swimming standards in an attempt to overtake Phelps. He is in the pool for 24 hours a week and on top of that there is gym and strengthening work – he has taken to tugging ships’ chains around and lifting 650lb tyres under the guidance of a former strongman competitor. He claims to be in the best shape of his life, and certainly his form in Shanghai suggests an athlete in rare form. “He’s just got a winning mentality,” is how Frank Busch, the US team director, puts it.

Tomorrow in Charlotte, home of the Bank of America, America’s two Olympic bankers have both entered the 200m freestyle, a race Lochte will have to win in London if he is to depose Phelps. They have swum against each other already this year, but given differing training schedules it has not been possible to gain any idea who is better placed on the road to London. This race, as the trials draw closer, will give a much clearer picture.

Phelps has been impressive in early season. In March he won the 400m medley at the Indianapolis Grand Prix in his fastest time since 2008. He looked good in the 200m medley too, while his freestyle swims have struck several observers as being back to 2008 levels.

After this meet, in which he is entered for four events to Lochte’s nine (is there an Olympic-sized clue there?), Phelps will head for Colorado Springs to train at altitude. “I need all the help I can get,” he said this week. “I have to play catch-up because I haven’t really had the best of three years.”

Lochte will stay in Florida, where he has been happily based since his student days. In contrast to the laid-back Phelps, the ever-active Lochte is more of a showman. He does a spot of modelling and likes to wear a jewel-encrusted grille over his teeth for medal ceremonies. It will become a familiar sight in London, but whether all that glitters will prove to be gold for Lochte remains the big question.

Last night Phelps trained in his home pool, in Baltimore, then posted a message on Twitter. It read: “And let the journey begin.”

Tale of the tape: Battle in the water

Olympic news you may have missed…

Great Britain’s sailing team for the Games has been finalised, with the final three spots filled by Stevie Morrison and Ben Rhodes in the 49er class and Alison Young, who goes in the Laser Radial event. “We’ve got people who’ve got potential to medal in every event,” said team leader Stephen Park.

Tomorrow The first Diamond League athletics meet of the season takes place in Doha. Usain Bolt and Yohan Blake have pulled out but British interest comes from Chris Tomlinson and Stephanie Twell, among others.

Nick Dempsey Windsurfer has blasted the International Sailing Federation as “out-of-touch” and says they are “ruining the sport” after dropping the event from the 2016 Games.