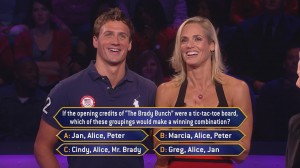 Daytona Beach’s Ryan Lochte and fellow Olympic swimmer Dara Torres decided to rely on the audience in playing “Who Wants to Be a Millionaire.”

Bad move. Most of the audience was incorrect when the topic was “The Brady Bunch.”

Here’s the question, the fifth the swimmers faced: “If the opening credits of ‘The Brady Bunch’ were a tic-tac-toe board, which of these groupings would make a winning combination?”

Forty-three percent said C, and 34 percent said A. The swimmers went with C, but A was correct. Lochte and Torres were hoping to win $1 million for the U.S. Olympic Committee; instead, they left with a guaranteed $10,000.

Gymnasts Dominique Dawes and Jonathan Horton did better by winning $25,000 for the USOC.