If the drama in the 2008 Olympic pool was all about Michael Phelps, at the London Games it will be focused on the battle between Phelps and teammate Ryan Lochte 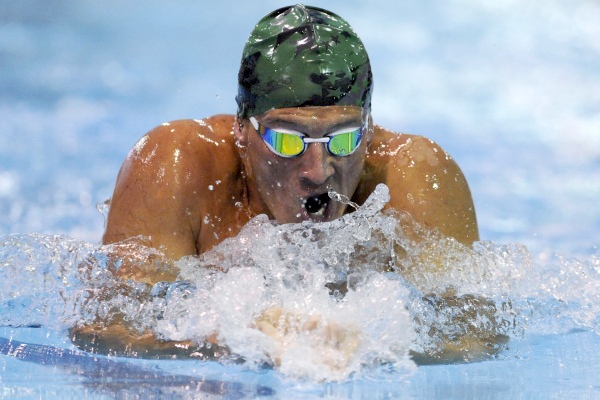 No one is looking forward to the US Olympic trials more than Ryan Lochte. As the only man to beat the swimming behemoth that is Michael Phelps in recent years, he’ll be the one to watch in Omaha, Neb. as Olympic hopefuls swim for the 52 coveted spots on the Olympic team. (Lochte and Phelps are expected to go head-to-head in several races). And as much as Lochte feeds off the rush of competing, especially against Phelps, there’s another reason he’s eager to welcome the start of trials in June 25. Trials means he gets a break from training.

Ever since he pulled himself out of the pool following his last race in Beijing in 2008, the 27-year-old Lochte has been prepping to make the 2012 team. That mission involves two-hour sessions in the pool, nine times a week, with three hours of dry-land workouts to build up the core, and two hours of weight lifting, including flipping some very heavy tires and throwing kegs several days a week. “Hopefully it ends pretty soon,” he told me during a brief sponsor trip to New York in May, clearly looking forward to the taper, which starts about three weeks before any of his big swim meets, when he gets to wean himself off the grueling training regimen in order to preserve his energy for racing.

The training is also keeping the free-spirited Lochte relatively under wraps; Lochte skipped an opportunity to meet and greet sports journalists during the United States Olympic Committee’s three-day athlete fair in May (Phelps and his coach, Bob Bowman, held a 40-minute press conference). While he appears on the cover of Vogue with other Olympic hopefuls, his agents have been turning down most interview requests — all for the sake of training.

The lockdown might be a bit confining for Lochte, who is a natural in front of the camera. Laid-back everywhere but in the pool, the New York native, who now lives in Florida, is known almost as much for his non-aquatic pursuits as he is for his accomplishments in the water. Stubbornly independent, he’s loathe to let swimming, a relatively conservative sport in which everyone tends to look the same, swathed in swim suits and hidden under rubber caps and face-concealing goggles, squash his personality. Defying his coach Gregg Troy’s advice, and no doubt giving Troy anxiety attacks, he continues to skateboard and play basketball, an out-of-the-water passion, every other day. “Oh, yeah, he’s terrified of me playing other sports,” says Lochte. “He’s waiting for me to come in one day with a broken ankle or something. But I told him, this is me. If I break my ankle right now, this Olympics wasn’t meant to be. I’m going to keep living my life the way I’ve been living my life, and nothing is going to change that even if the Olympics are coming up.”

When he was 17, he showed up to accept his medal after winning a race wearing a T-shirt with Fred Flintstone announcing “I’ll make your Bedrock” (he remembers the T-shirt, but can’t remember what meet it was). A long-time fan of Lil Wayne, at the 2007 world championships, he flashed a rap-inspired diamond-encrusted grill on the podium while accepting his silver medal. “It’s so hard to express yourself because swimmers are pretty much paying attention to a black line for hours out of a day,” he says. “But I want to make swimming bigger than the sport it is now, and the only way to do it is by showing your personality out there.”

Lochte has always been a big personality. Ileana Lochte, a swimmer who emigrated from Cuba as a seven year old, always knew she would teach her children how to swim, and started Lochte when he was in diapers. He was soon spending more time at the pool, eventually joining his mother’s learn-to-swim program. But keeping her rambunctious son in the water was another story. “He was so energetic, and so disruptive,” she says. “I would let him swim with the older kids for warm up, and then send him out [of the pool], because it would take him the rest of the practice to finish with his shower and play in the locker room and the slip ‘n slide.”

Ileana, however, did manage to teach Lochte all the basic strokes — back, breast, butterfly and freestyle — that form the foundation of how he swims today. “She taught me all my stroke techniques; people say I have a flawless or pretty stroke and I got it from her,” says Lochte. “I haven’t changed them much.”

Lochte switched coaches from mom to dad Steve as a teen — still care-free and easily distracted, he was now getting kicked out of practice by his irate father. “My mom was nicer; when I got to my dad, he was a hard ass,” he says. “He would pull me out of the water and start yelling at me. It was scary.” Neither his mom nor his dad, who have since divorced, treated him differently because he was their son, however. Lochte appreciates that now, although he couldn’t then.

At the Beijing Games, Lochte came within seconds of Phelps’ world record time in the 200 m and 400 m individual medley (IM) races. When Phelps sputtered in the intervening years, Lochte surged ahead to set a new world record in 2011 in the 200m IM. At the 2011 world championships, Lochte collected five golds to Phelps’ four, which started to annoy Phelps and, Phelps has said, spur him on to regain his 2008 Olympic form and his passion for racing.

Lochte never lost that drive, or at least not for any noticeable period of time, ever since his first meet, when he discovered that racing was…fun. “I enjoy racing so much, ever since I was eight or nine I trained every stroke because it was the only way I could race a lot,” he says.

And swimming in Phelps’ shadow? “It could be a curse, but it can also be helpful,” he says, of constantly being compared to the Phelps, who could, in London, become the most decorated Olympic athlete of all time. “Everyone says that if he wasn’t around, that I would be the greatest swimmer ever. But at the same time, it’s good because we help each other out. He knows I’m right there, and I know he’s right there, and we push each other every day. Whether or not we’re training together, we know we’re both training at home. We don’t want to lose, we want to win, and that pushes each of us.”

While Phelps has announced that 2012 will be his last Olympics, Lochte is already looking to the 2016 Games in Rio de Janiero. “Any chance I can race the best people in the world, I’d be more than happy to,” he says. “I definitely want to go to the 2016 Olympics. My family has always said to have fun at anything you do, to enjoy life. After 2016, if I’m still having fun in the sport, I’ll definitely go until 2020. Although I’ll be really old.”