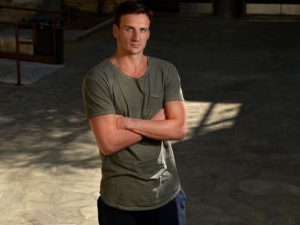 It’s hard to imagine any athlete more excited for the ball to drop and 2017 to begin than Ryan Lochte.

He’d spent that second half of 2016 trying to move on and move forward from his involvement in that infamous gas station incident that cast a dark shadow over the second week of competition at the Rio de Janeiro Olympic Games. The incident embarrassed the entire U.S. Olympic contingent and ultimately cost him his most high-profile sponsors.

“2016 is now in the past, and I’m putting that behind me,” Lochte told USA TODAY Sports. “I’m looking forward to having a clean start.”

That clean start includes a wedding — he’s engaged to former Playboy model Kayla Rae Reid — and fatherhood. The couple is expecting their first child — a baby boy — in June.

“I’m prepared for a lot of stinky diapers,” the 12-time Olympic medalist said, laughing. “I have nieces and nephews, so I know what it’s going to be like. I’m actually kind of thrilled to be able to change diapers and do all that and go through this process with Kayla, and our whole new family. I’m definitely really excited.

Ryan Lochte’s journey from the dumps to dancing
Beyond the changing of diapers — a sacred rite of passage for any new parent — Lochte’s clean slate also includes a change of scenery. He’s soon relocating from Charlotte to Los Angeles, where Lochte said he plans on train alongside three-time Olympic medalist Conor Dwyer with an eye on the 2020 Games in Tokyo.

“Once we get settled into our new place, that’s when I’m going to start really training for 2020,” said Lochte, who will turn 36 during the Tokyo Olympics. “It should be fun.”

The final piece of Lochte’s fresh start for 2017 is a brand-new partnership — with PowerBar, which is debuting its Clean Start Pledge and new Clean Whey product line. Olympians have a hard enough time finding sponsors and business partnerships that will allow them the luxury of training full-time; Olympians tied to negative headlines and banned from competition for 10 months find it even more challenging. So Lochte’s partnership is a big deal, a signal that the page may have turned for good.

“To have a big company like PowerBar (partner with me means a lot),” Lochte said. “As an Olympian, you want to surround yourself with the best brands out there.”

He couldn’t have been sure, a few months back, that they would be willing to surround themselves with him. But that’s what time passing and major life changes can do — allow you to reinvent yourself and not let the past define you.

Lochte is trying to do just that.