Ryan Lochte Sexes Up The Small Screen For The New Reality Series What Would Ryan Lochte Do? 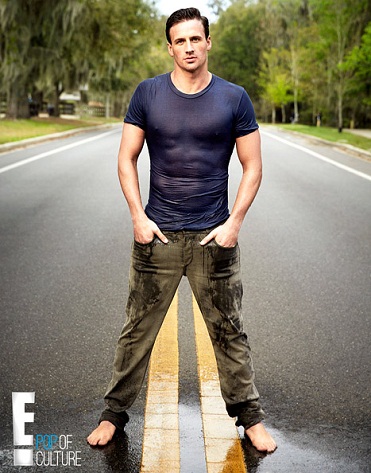 Ryan Lochte is whetting our appetites in the promo pictures for his new reality series What Would Ryan Lochte Do? The 11-time Olympic Gold medalist posed soaking wet to promote his new E! reality series, which creators say will  “take viewers inside the unpredictable and offbeat life” of the hunky swimmer.

“Ryan Lochte captured everyone’s attention at the Summer Olympics with his athletic prowess and his utterly unique and unaffected approach to life,” E! Entertainment President Suzanne Kolb said in a statement recently. “He is an incredibly endearing personality who is sexy, entertaining and fun. Watching this show, I believe people will fall into three categories: They want to be him, sleep with him or mother him.”

The eight-episode docu-series will follow the athlete living the life after his star-making turn at the 2012 London Olympics as he parties it up in Gainesville, Florida, flirts with romance, and trains with stern coach Gregg Troy. “I had so much fun shooting in Gainesville,” Lochte told E! about the shoot. “I was on my college campus—it felt like home…or as much as it can feel like home when people are dumping buckets of water all over you in the middle of a street.”

Check out Lochte in a sneak peak from What Would Ryan Lochte Do?, premiering Sunday, April 21 at 10 p.m. ET/PT, below. Do you think the series will be a splash?